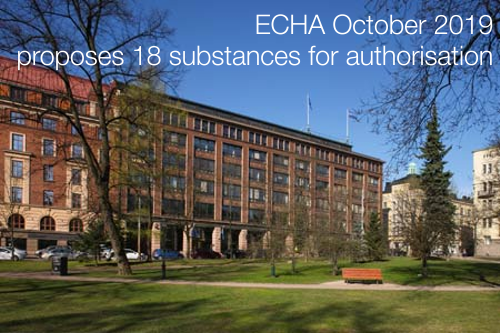 18 substances of very high concern (SVHCs) are recommended to be added to the REACH Authorisation List.

Helsinki, 1 October 2019 – ECHA's ninth recommendation to the European Commission to prioritise substances of very high concern for authorisation includes 18 substances. Thirteen of these substances are toxic for reproduction, of which one has also endocrine disrupting properties. The other substances are an endocrine disruptor, a carcinogen, a very persistent and very bioaccumulative (vPvB) substance and two respiratory sensitisers.

The substances have been prioritised from the Candidate List because of their intrinsic properties in combination with high volume and widespread uses, which may pose a threat to human health or the environment. Some of these substances are currently not used in the EU but could replace other substances recommended for the Authorisation List (Annex XIV). Their inclusion should avoid regrettable substitution.

ECHA organised a public consultation on the draft recommendation between September and December 2018. The Member State Committee (MSC) considered the comments received and adopted its opinion on 26 June 2019.

ECHA took into account the comments and registration updates as well as the MSC's opinion when deciding on the substances now recommended to be added to the REACH Authorisation List and for proposing the related latest application and sunset dates. All substances that underwent public consultation are included in the final recommendation.

The final decision on the inclusion of the substances in the Authorisation List and on the dates by which companies will need to apply for authorisation to ECHA will be taken by the European Commission in collaboration with the Member States and the European Parliament.

List of substances included in the ninth recommendation, including examples of their uses in the scope of authorisation

1) The substance has no registered uses but is recommended based on grouping considerations as it could potentially replace other lead stabilisers in some of their uses. This is to avoid regrettable substitution.