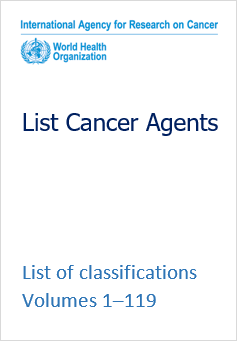 The IARC categorizes agents, mixtures and exposures into five categories. Note that the classification is based only on the strength of evidence for carcinogenicity, not on the relative increase of cancer risk due to exposure, or on the amount of exposure necessary to cause cancer. For example, a substance that only very slightly increases the likelihood of cancer and only after long-term exposure to large doses, but the evidence for that slight increase is strong, would be placed in Group 1 even though it does not pose a significant risk in normal use.

For definitions of these groups, please see the Preamble.

It is strongly recommended to consult the complete Monographs on these agents, the publication date, and the list of studies considered. Significant new information might support a different classification.

For agents that have not been classified, no determination of non-carcinogenicity or overall safety should be inferred

Although care was taken in preparing these lists, mistakes may be present.