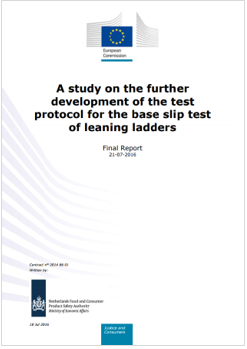 In the Commissions view the European ladder standard needs improvement and therefore published a tender in 2014 with the aim to study the further development of the CEN TC93/WG10 test protocol for the base slip test of leaning ladders.

The product safety laboratory of the Netherlands Food and Consumer Safety Authority started the study in January 2015. The main parameters were studied and the protocol was improved.

Three separate laboratories executed the tests according the protocol independently to judge the applicability of the protocol and variability of the results. The laboratories managed to execute tests under equal conditions. The results show a large deviation and therefore the protocol in its actual form cannot be used as a standard test to distinguish the safe from the unsafe ladders concerning the resistance against base slip. No explanations were found for the large deviation.

Therefore, more research is needed. It is not certain if the protocol can be further improved. It is recommended to continue with the development of an alternative method.

To further develop the test protocol for the base slip test of leaning ladders 486 tests were done with 29 ladder samples throughout the project. Main parameters such as floor material, angle and vertical load were varied. Also other parameters were studied as vertical load position, roughness, steel cable attachment, flow rate, temperature, ladder alignment and cleaning. Requirements and tolerances for the parameters were defined. The CEN TC93/WG10 protocols were revised to improve the readability and practicability to achieve an unambiguously preformed test. Three separate laboratories have executed the test according to the new protocol.

Although the instructions in the protocol lead to equal test set-ups and test conditions, the obtained results deviate largely. Results obtained on stainless steel in task 1.4 turned out to be 20% lower than in task 1.2. On float glass, 8 of 10 samples slid 40 mm within one minute in task 1.3 while 8 of 10 samples slid less than 10 mm in one minute in task 1.6. The Hailo ladder remained standing during tests on stainless steel in task 1.6 while it directly slid in most of the tests during the round robin. The results of the round robin are inconsistent.

The NVWA has not found a provable explanation for these findings. Only assumptions can be made. One assumption is that the friction behaviour of the polymer of the feet is sensitive to variations on micro scale. The tolerances set to the main parameters in the protocol are too coarse to control these variations. This assumption is supported by the polymer expert of the KIWA institute in Rijswijk (NL).

There are two possibilities for continuing the development of a base slip test for leaning ladders.

1) Improve the test protocol. Firstly, tolerances need to be tightened to control the variations on micro scale. However, tightening the tolerances could lead to requirements that are difficult to meet for test laboratories. Secondly, a test surface needs to be specified that leads to a uniform test condition. This involves characterisation of surface by identifying the right parameters, a reproducible process to treat a surface and a measurement method to measure the surface parameters. Suggestions are to characterise the surface conditions by more than one roughness indicator, e.g. Rz and Ra. Furthermore, in the field of tribology it is common to test with uniform surface conditions. Sand blasting is a process that is used in this field to produce specific surface conditions. It needs to be studied to find out whether this process is applicable for base slip test. The advantage of further developing the protocol is that one can build on the experience and knowledge gained up till now. A disadvantage of putting more effort in improving the protocol is that the outcome is uncertain.