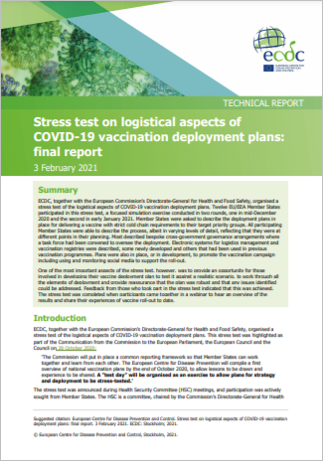 ECDC, together with the European Commission’s Directorate-General for Health and Food Safety, organised a stress test of the logistical aspects of COVID-19 vaccination deployment plans. Twelve EU/EEA Member States participated in this stress test, a focused simulation exercise conducted in two rounds, one in mid-December 2020 and the second in early January 2021.

Member States were asked to describe the deployment plans in place for delivering a vaccine with strict cold chain requirements to their target priority groups. All participating Member States were able to describe the process, albeit in varying levels of detail, reflecting that they were at different points in their planning. Most described bespoke cross-government governance arrangements where a task force had been convened to oversee the deployment. Electronic systems for logistics management and vaccination registries were described, some newly developed and others that had been used in previous vaccination programmes. Plans were also in place, or in development, to promote the vaccination campaign including using and monitoring social media to support the roll-out. One of the most important aspects of the stress test, however, was to provide an opportunity for those involved in developing their vaccine deployment plan to test it against a realistic scenario, to work through all the elements of deployment and provide reassurance that the plan was robust and that any issues identified could be addressed.

Feedback from those who took part in the stress test indicated that this was achieved. The stress test was completed when participants came together in a webinar to hear an overview of the results and share their experiences of vaccine roll-out to date.
...
add more in attachment