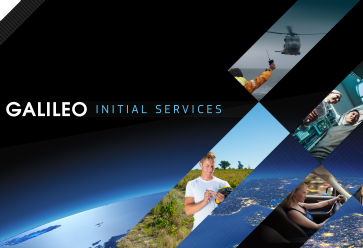 With the Declaration of Initial Services, which will be officially announced by the European Commission in Brussels, Galileo, in conjunction with GPS, will start to deliver the following services free of charge:

Support to emergency operations: Today it can take hours to detect a person lost at sea or in the mountains. With the Search and Rescue Service (SAR), people placing a distress call from a Galileo-enabled beacon can be found and rescued more quickly. The detection time will be reduced from up to three hours to just 10 minutes and the potential search area will be reduced by 75%. This service should be improved in the future by notifying the sender of the emergency call that they have been located and help is on the way.

More accurate navigation for citizens: The Galileo Open Service will offer a free mass-market service for positioning, navigation and timing that can be used by Galileo-enabled chipsets in smartphones or in-car navigation systems. Such smartphones have been on the market since autumn 2016 and they can now use Galileo signals to provide more accurate positions. By 2018, Galileo will also be found in every new model of vehicle sold in Europe, providing enhanced navigation services to a range of devices, as well as enabling the eCall emergency response system. People using navigation devices in cities, where satellite signals can often be blocked by tall buildings, will also benefit from the increase in positioning accuracy provided by Galileo.

Secure services for public authorities: Galileo will also support public authorities such as civil protection services, humanitarian aid services, customs officers, and the police through the Public Regulated Service. It will offer a particularly robust and fully encrypted service for government users during national emergencies or crisis situations such as terrorist attacks to ensure continuity of services.

The Declaration of Galileo Initial Services means that the Galileo satellites and ground infrastructure are now operationally ready. During the initial phase, the first Galileo signals will be used in combination with other satellite navigation systems, such as GPS. In the coming years, new satellites will be launched to enlarge the Galileo constellation, which will gradually improve Galileo availability worldwide. The constellation is expected to be completed by 2020 when Galileo will reach full operational capacity.