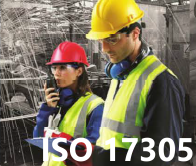 Industrial Compliance reports on the countdown  to ISO 17305, which will bring a single global safety standard far machinery control systems

The adoption target for IEC/ISO 17305 is 2016 and this will herald the merger of the existing two standards that currently deal with the safety of machinery control systems ISO 13849 and IEC 62061.

It is expected that  there  will  then  be a further with two years transition period.

Some  OEMs, especially those located  outside Europe, have questioned the need  for, and  the relevance of, a merger to create a global safety standard for machinery control  systems.

Understandably, many  OEMs also  have a keen  interest in confirming that the potential gains from  the merger justify climbing what might appear to be another standards mountain.

"Industry is steering a course towards an optimised global standard"

These gains, for example, could  include  capitalising  on advanced technologies and eliminating technical barriers in global trade.

Rockwell Automation believes that OEMs should be optimistic about the development.

The   merger  to  create IECIISO 17305 signals the summit, in terms of  challenges related to global machinery safety control standards. It does not believe  that the basic methodology  and essential requirements introduced  in ISO 13849 and IEC 62061 will require any significant alterations and unifying  them should simply combine the best achievements from  both, simplifying  and  making a single, more user-friendly standard.

It may also  resolve some known issues and  grey  areas that  have been  identified  during the last  six years of using the two existing standards.

Having navigated the previous safety standard migration will be a useful preparation for adopting IEC/ISO 17305.

With the EN 954-1 to EN ISO 13849-1 experience in hand, OEMs will find the next transition a more manageable leap.

It will be possible to make use of any lessons learned from continued use of the existing ISO and IEC standards to streamline the transition.

Growing adopt ion across the world of the ISO  and IEC standards that superseded EN 954-1 at the end of 2011 is validating that prediction.

The  new generation of complex electronic and  programmable safety  automation technology exceeds the ability of the  relatively simple and  semiprescriptive EN 954-1, which essentially provided  guidance  on control system structure. The newer, more comprehensive functional safety standards enable confident use of new technology by requiring designers to assess all aspects relevant to the longterm reliability of safety components.

But those types of trade-ups resulted  in a methodical approach that is helping OEMs develop safer machinery, using standards that allow the use of contemporary  technology and  can be used to show compliance across global markets -with more predictable performance, greater  reliability and  availability, and improved return on investment.

Reasons for an OEM to take a wait and see position on IEC/ISO 17305 are becoming harder to find.

The most obvious indicator that a unified standard will emerge is the approaching end of development activity on ISO 13849 and IEC 62061 as separate stan­dards.

Other indicators for a global standard

The IEC/ISO 17305 preliminary planning process has already started , and drafting will begin in 2013.

ISO and IEC are also relevant to US machinery and equipment building.

There is one  particularly compelling, mainstream precedent on  this topic.

ISO 12100 is a basic principle machinery safety standard  providing a best­ practice framework to identify risk and eliminate hazards during the design stage.

It demonstrates forcefully that what have been perceived as 'European standards' are truly international.

Not only is ISO 12100 a consen­sus standard in the United States, but some of its major  influences are  provided by US OEMs, machinery users and safety device manufacturers.

Further,  many national standards already have provisions in common with the equivalent ISO and IEC versions.

An increasing number of regions are adopting ISO and IEC standards as national standards.

Consider a US manufacturer selling to China and the European Union, or a China-based company exporting to the United States.

The different standards that come into play-from ULand ANSI to EN and GB - might appear to be silo creating guidelines that complicate life for global exporters  and   importers a like.

But current standards are often  similar. Sometimes up to 90% similar from one  to the next.

What arc the most frequent commonalities?  Predictably, they share significant elements with ISO and IEC standards.

Today’s system complexity and data demands mean  that  safety  functions are often not a simple case  of switching off the power.

Safety-capable logic that enables intelligent safely operations is just one example of the flexible, advanced functionality requiring  greater  provisions  against  mistakes and faults.

The  increased complexity and requirements for reliability calculations  did  create some  understandable frustrations, not  least a lack of data.
However,  in  many  cases   this  issue has now been  resolved.
There is no  point in delaying, hoping that  the  complexity will  disappear.
It will not.
Understanding the existing ISO 13849 and IEC 62061 will also allow for easier transition to IEC/ISO 17305.

The IEC/ISO 17305 is scheduled to publish by 2016 and the intervening time between now and then would be best spent getting familiar with ISO 13849 and IEC 62061 foundations.

Organisations familiar with the two standards should be very comfortable with the content of the unified standard.

The merger process is not expected to introduce any significantly different requirements, instead it will clarify and simplify.

Industry is steering a course towards an optimised global standard that will help OEMs buildsafer, higher performing and internationally competitive machinery while helping to take cost out of the multinational safety-compliance process.