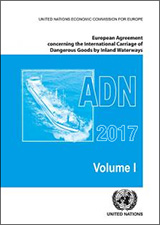 The European Agreement concerning the International Carriage of Dangerous Goods by Inland Waterways (ADN) done at Geneva on 26 May 2000 under the auspices of the United Nations Economic Commission for Europe (UNECE) and the Central Commission for Navigation on the Rhine (CCNR) has been in force since February 2008.

They also address requirements and procedures for inspections, the issue of certificates of approval, recognition of classification societies, monitoring, and training and examination of experts.

They are harmonized to the greatest possible extent with the dangerous goods agreements for other modes of transport.

The Agreement has been regularly amended and updated since its entry into force. This version has been prepared on the basis of amendments applicable as from 1 January 2017.

in Documenti Merci Pericolose ENTI
Eurotunnels 2019 ADR Dangerous Goods Regulated I - Introduction to Eurotunnel’s policy for ADR regulated goods The Channel Tunnel has been designed to be one of the safest transport systems known to date. Eurotunnel’s dangerous goods policy is therefore intended to ensure the safety of its… Leggi tutto