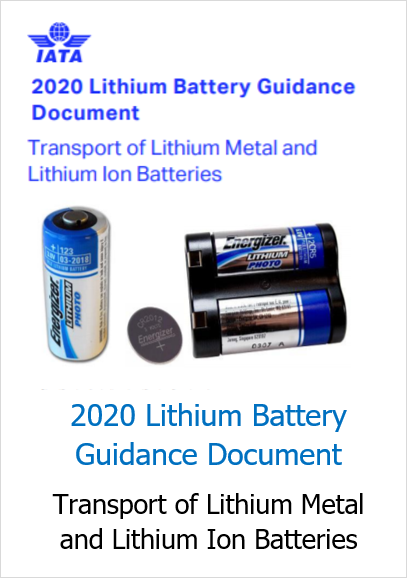 This document is based on the provisions set out in the 2019-2020 Edition of the ICAO Technical Instructions for the Safe Transport of Dangerous Goods by Air (Technical Instructions) and the 61 st Edition of the IATA Dangerous Goods Regulations (DGR). The provisions of the DGR with respect to lithium batteries may also be found in the IATA lithium Battery Shipping Guidelines (LBSG) 7 th Edition. In addition to the content from the DGR, the LBSG also has additional classification flowcharts and detailed packing and documentation examples for lithium batteries

Definitions Lithium Battery – The term “lithium battery” refers to a family of batteries with different chemistries, comprising many types of cathodes and electrolytes.

For the purposes of the DGR they are separated into:

Note: Lithium ion batteries packed by themselves (Packing Instruction 965) (not contained in or packed with equipment): (a) must be shipped at a state of charge (SoC) not exceeding 30% of their rated capacity. Cells and/or batteries at a SoC of greater than 30% may only be shipped with the approval of the State of Origin and the State of the Operator under the written conditions established by those authorities, see Special Provision A331; and