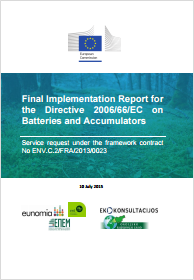 Report for the Directive 2006/66/EC on Batteries and Accumulators

This report has been prepared by Eunomia Research and Consulting based in the UK and its partners, ENT Environment and Management based in Spain, EPEM S.A. based in Greece, Ekokonsultacijos based in Lithuania and the Environmental Research Institute based in Slovenia (ORZ) for the European Commission, DG Environment under Study Contract DG ENV.C.2/FRA/2013/0023.

The views expressed herein are those of the consultants alone and do not necessarily represent the official views of the European Commission.

It regulates the placing on the market and collection, treatment, recycling and disposal of batteries in the European Union (EU) with the aim of improving their environmental performance.

It sets maximum quantities for certain chemicals and metals in certain batteries; tasks Member States with encouraging improvements to the environmental performance of batteries; requires proper waste management of these batteries, including recycling, collections, ‘take-back’ programs and disposal; sets waste battery collection rates; sets financial responsibility for programs; and makes rules covering most phases of this legislation, including labelling, marking documentation, reviews, and other administrative and procedural matters. The last amendments to the Directive were incorporated in 2013. 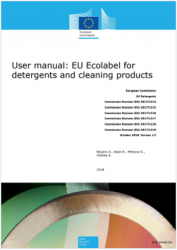 EU ecolabel for detergents and cleaning products User Manual 2018 This manual guides the... 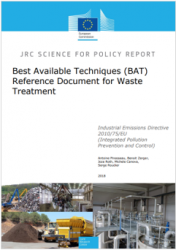 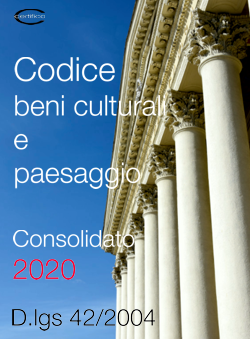