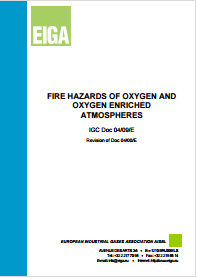 This document explains the fire hazards resulting from handling oxygen and the relevant protective measures that should be taken.

This document consists of three parts. Part I, is intended for line managers and supervisors.

It provides the background to the subject and a description of the fire and explosion hazards associated with oxygen and oxygen enriched atmospheres.

Part II, is Appendix B, and is a summary of Part I suitable to be produced as a pamphlet to be handed to those involved in daily operations involving oxygen or used in training presentations.

Part III, is Appendix C, and lists some accidents which have taken place in recent years and which can be used as examples underlining the hazards of oxygen and oxygen enriched atmospheres.

It is recommended that the document be used as the basis for training programmes.