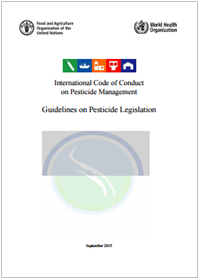 International and national legal frameworks governing pesticide management have undergone significant changes over the past 25 years.

Since the first adoption of the Code of Conduct in 1985, several other international instruments dealing directly or indirectly with pesticides or pesticide management have come into force. The most important of these are the Rotterdam Convention on the Prior Informed Consent Procedure for Certain Hazardous Chemicals and Pesticides in International Trade (Rotterdam Convention), the Stockholm Convention on Persistent Organic Pollutants (Stockholm Convention), the Basel Convention on the Transboundary Movement of Hazardous Wastes and their Disposal (Basel Convention), the Montreal Protocol on Substances that Deplete the Ozone Layer (Montreal Protocol) and the International Labour Organisation Convention No. 184 on Safety and Health in Agriculture (ILO Convention 184). Other relevant developments have included the launch of a Strategic Approach to International Chemicals Management (SAICM) and the adoption of a new Globally Harmonized System of Classification and Labelling of Chemicals (GHS), which is intended to standardize and harmonize the classification and labelling of chemicals.

At the time the Code of Conduct was first published, most developing countries and countries with economies in transition did not have pesticide legislation in place. Awareness of the hazards of pesticides was limited, while the use of pesticides, including highly toxic products, was increasing. Significant progress has been made since then, and now almost every country has some type of legislation covering pesticides. However, many of the existing laws have weaknesses. For example, they may not sufficiently reflect the requirements of international agreements or regional initiatives to harmonize requirements, or they may not be adequately connected to new national legislation on environmental protection, chemicals management, or other relevant areas. Changes in the institutional framework and associated mandates may not have been addressed. Other common issues include outdated penalties and the absence of a clear assignment of authority to enforce the legislation.

Requirements of various binding international agreements as well as the numerous recommendations of non-binding instruments can place a heavy burden on small or resourcepoor ministries or departments in charge of pesticide management and regulation. Little comprehensive advice is available to assist countries with understanding which rules are binding or non-binding and which should or could be reflected in national pesticides legislation.

The purpose of these Guidelines is to provide guidance to governments that seek to review, update or design national pesticide legislation. (1)It should be emphasized, however, that legislation alone cannot ensure effective pesticide management and adequate protection of the environment and public health. Governments will need to have in place the necessary institutional infrastructure for registering pesticides and enforcing legislation. Further, it will require effective supporting policies and tools to promote sustainable pest and pesticide management. (2) This may include promotion of Integrated Pest Management (IPM) and Integrated Vector Management (IVM) through training programmes and incentive schemes, enhancement of the availability and use of low risk products, fostering scientific research, carrying out public education campaigns and providing training for inspectors, retailers and professional users. A solid legislative framework should underpin the set of necessary institutional framework, policies and tools.

This document supersedes the Guidelines for Legislation on the Control of Pesticides of 1989.

For details regarding specific technical elements of pesticide legislation, reference is made to the set of technical guidelines that FAO and WHO have published. Regularly updated lists with links to these documents can be found at: FAO: http://www.fao.org/agriculture/crops/thematic-sitemap/theme/pests/code/list-guide-new/en/ WHO: http://www.who.int/whopes/recommendations/who_fao_guidelines/en/

Finally, FAO maintains a repository of national legislation relevant to agriculture. This includes the pesticide legislation of a large number of FAO member countries that might serve as a reference. The repository, called FAO-LEX, can be found at http://faolex.fao.org/